(Adapted from a speech presented to the Iowa State University Foundation Governors on Sept. 20, 2002)

Wallace Stegner, a University of Wisconsin graduate and Pulitzer Prize-winning author, wrote, "The truth is, a place is more than half memory. No place is a place until things that have happened in it are remembered."

That's very true of Iowa State University and all of the buildings that make up the campus. And the older the building, the more things that have happened in it that are remembered.

Unfortunately, not a lot of the stories have been written down. Rather, they are simply a part of the folklore -- handed down from occupant to occupant.

It's actually both. Here's a little about its history as the Chapel Library Museum, and later as a classroom and office building, and some of the stories passed on by those who have worked in the building over the past years.

The need for a building first arose in 1870, only two years after Iowa State opened. The College Board minutes read: "Next to the men that teach its students and to the men that control its affairs, the library and museum are the most important means of building up a great institution."

In typical political fashion -- then and now -- 20 years later, a library and museum building was approved, and the building was named after Sen. Justin Morrill, author of the land-grant legislation.

Naming the building after Sen. Morrill was significant since Iowa was the first state in the nation to accept the terms of the Morrill Act (1862) and Iowa State was the first institution to be designated a land-grant institution (1864) -- even though all that was here at the time was the Model Farm.

Morrill Hall was built at cost of $28,739 and dedicated on June 16, 1891. Professor Charles Bessey was principal speaker and a letter of congratulations was read from Sen. Morrill.

Over the entrance of Morrill Hall were the words "Chapel Library Museum," for its three principal uses. However, another principal use was for classrooms and laboratories for zoology, entomology and geology, and part of the basement was used as a physical education gymnasium. 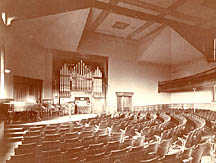 The chapel in Morrill Hall, about 1891 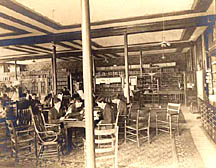 The library in Morrill Hall, about 1910

In his 1891 college report, President William Beardshear had glowing things to say about Morrill Hall, calling the chapel a "gem" and including this: "The basement is well utilized by a flourishing gymnasium and rooms for the preparation of subjects of natural history and display of fishes." (One can only imagine what the combination of sweat socks and dead fish must have smelled like. It wasn't long before faculty complained, not about the smell, but that the ceiling was too low and the room too small for physical education and gymnastics.)

Bats and bees are considered the resident denizens of Morrill Hall. They were there ever since the building was built and they're there now.

Staff always complained about bees flying around. They thought the bees came in through the deteriorating windows. However, when work crews broke into a wall as part of a minor remodeling project on the third floor, they found a massive bee hive. The workers called entomology, and the beehive was removed -- along with a huge amount of honey.

Bats were a constant nuisance. They really enjoyed flying around the chapel but occasionally would get loose in other parts of the building. Those who worked in Morrill Hall could tell a bat was loose by the slamming of doors. They would call Facilities, who would send staff over to catch the bat and release it outside. The bat probably flew right back into the building through a hole somewhere.

In the early 1980s, the roof on Morrill Hall was replaced. As part of this, crews inspected the underlying support structure from the inside. What they found when they got up close alarmed them. The mortar had a fibrous material in it and the first thing the workers thought of was asbestos.

The third floor was sealed off and crews with haz-mat suits were sent in to collect samples. What they found was not asbestos, but that the original building mortar had mule hair used as a binder.

The following comes from an account by John Hungerford, an 1878 graduate:

For many years, there was a stuffed camel in the Morrill Hall Museum on the third floor. How did it get there?

One of the spectators was a student named Billy Bryan, who loved taxidermy and had already caught, killed and stuffed dozens of native animals, many of which he donated to the college.

Bryan's goal was to stuff the camel and he did. Hungerford, who assisted in the process, noted, "Why, that camel was restored to life-like appearance, everything but the wicked look in the eye was restored and made to look as if the critter was alive and enjoying good health."

Bryan went on to fame as a scientist, author and one of the most famous taxidermists in the United States. He headed the museum in Exposition Park in Los Angeles for many years.

The camel stayed behind after Bryan graduated, being moved around campus until Morrill Hall was built and it was added to the college museum collection on the third floor.

The story doesn't end there. Indeed, it has a sad ending.

The camel died -- again -- this time rather ignominiously. The details are unclear, but either a water pipe burst or a torrential rain leaked in. The result was the stuffed camel was soaked -- and it exploded. It was then unceremoniously discarded. 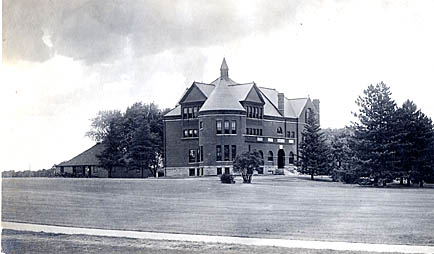